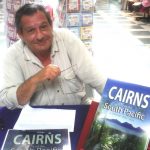 Bio
Dr Timothy Bottoms is a professional historian specialising in Australian history. Dr Tim is also a Class One Radio Announcer and Producer. He began by producing and presenting a four-part half hour series called Radio Oz - A History of Australian Radio (2SER-FM) which won an award for Creative Use of the Medium in the Australian Hi-Fi Radio Awards in 1981. Also produced and presented a series of interviews in a six-part half hour series on the Australian Film Industry in 1980. In 1982 Tim produced and presented A Short History of Australian Radio Advertising – on AWA Network Radio 2GN (1982).

Tim has experience at producing radio commercials. He has also written, produced and presented a radio documentary entitled An Introduction to Kowanyama (an Indigenous community on the west coast of Cape York). Similarly, he produced, presented Inan Nayee Aurukun Wik Kath (Listening to the Aurukun Story).

Tim has also researched, written, produced and presented a half hour film documentary called Defending the North, Frontline Cairns 1940-1946; as well as another half hour documentary on Queensland's colonial frontier called Conspiracy of Silence.

Dr Tim was also interviewed for the NITV documentary A War of Hope (last aired 4 June 2016), regarding the forced removal of mission 'inmates' to Woorabinda in 1942.

Tim's work can be viewed or listened to, at:

Visiting Fellow at the National Museum of Australia, researching and writing book on Queensland’s 19th century frontier entitled Conspiracy of Silence, the Colouring of Australian History.

Bama Country – This book covers the Indigenous rainforest people’s traditional use of plants, seasons and the pharmacopoeia of the FNQ rainforests. Published Fishtail Solutions, March 2008.

Research & interpretation of primary source documents for Indigenous Education & Training Alliance (IETA, Education Queensland) relating to massacres, missions and government policy in North, Central and Southern Queensland & the Gulf, scanned for Powerpoint presentations for the Cross-Cultural Awareness Program. This is part of a program which is to become mandatory for all Queensland teachers. (Oct 2003-Aug 2005)

July 2002 completed 110,000 word: A History of Cairns – City of the South Pacific 1770-1995 for the Cairns City Council, also submitted and accepted as PhD with Central Queensland University.

Lecture on Federation in Far North Queensland presented at the Cairns Regional Gallery (4 September 2001) as a part of the Centenary of Federation Queensland Far North celebrations.

A Preliminary History of the Djabugay was produced as the basis for the Historical Film Theatre presentation for the Tjapukai Cultural  Park (August 1995).

In the Path of Buda:dji  was produced as one of six chapters in Djina:la Galing - 'Going On Foot', a Cultural Heritage Study & Archaeological Survey for the Barron Gorge Walking Track Strategy, Q.N.P.W.S. (June 1995).

An Historical Overview of the Mulgrave Shire was commissioned by Pawsey & Prowse, Landscape Architects, for the then Mulgrave Shire Council (April 1995).

An Historical Overview of Land Use at Mona Mona Mission, 1913 to 1963 was produced for the Mona Mona Community Development Strategy, sponsored by ANCA & Mona Mona Aboriginal Corporation. (November 1994). Published in the Journal R.H.S.Q. (May 1998).

A Short Walk On the Wild Side - an audio-commentary on the Red Arrow Walking Track in the Mt. Whitfield Environmental Park. This deals with the history of the Cairns area, botany and the Aboriginality of the landscape. (August 1993).

The Bama - People of the Rainforest - published in Cairns by Gadja Enterprises (December 1992).

The White Sands People - An Historical Overview of the Wuthathi, Cape Grenville (May 1992).

From Bama Djumburru to Gadja Roads - A Profile History of Towns & Roads on the Atherton Tablelands, F.N.Q. commissioned by Northern Archaeology Pty Ltd., for Telecom Australia. (May 1992). Published in the Journal R.H.S.Q. (November 1995).An Introduction to Kowanyama - a radio documentary on the history and culture of the indigenous people of Kowanyama, west coast Cape York Peninsula. Commissioned by the Kowanyama Aboriginal Land & Natural Resource Management Office, in consultation with the Elders.  (April 1992).

The World of the Bama - a synchronised audio-visual presentation, for the Pre-Separation Conference held by the Royal Historical Society of Queensland on August 10 1991. Later published in the Journal R.H.S.Q.  (February 1993).

The Role of Community Rangers on Cape York Peninsula – an audio documentary where Rangers from around the Cape introduce their community and their role as Rangers to a broader audience. Thursday Is.(September 1991).

Inan Nayee Aurukun Wik Kath - Listening to the Aurukun Story, a radio documentary history produced in conjunction with Elders and Rangers for the TAFE Ranger Program and the Aurukun Shire Council (June 1991).

The River - developed the structure for a community-based curriculum, in close consultation with the Kowanyama Land & Natural Resource Management Office, Elders, Council and State School (January 1991).

Djarrugan - The Last of the Nesting - a 30,000 word revisionist interpretation of Aboriginal-European relations in the Cairns rainforest region up to 1876. M.A.(Qualifying) Thesis J.C.U.   (March 1990).

Radio Oz - A History of Australian Radio - a four part half-hour series, first broadcast in 1981 on 2 SER-FM (Sydney). This won an Award for Creative Use of the Medium in the Australian HI-FI Radio Awards (1981).