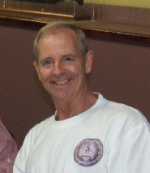 Bio
Danny Allsopp completed his Master of History degree with the University of New England, graduating in March 2015. He has been a member of the American Civil War Round Table – Qld since 2013, a not-for-profit society and has conducted several historical talks for members. Additionally, this lead to participating in the annual History Alive festival held over a weekend at Fort Lytton whereby Danny has engaged with the public to answer questions on the American Civil War or any other aspects of American history or history generally. Museums have always been of interest including attending the Queensland Museum’s displays titled: Mummy, Secrets of the Tomb; Afghanistan, Hidden Treasure from the National Museum of Kabul; Medieval Power; Gladiator and others. A different type of example was attending a talk from former NASA astronaut Buzz Aldrin in Sydney. Assistance was provided to the University of New England for research in the American Civil War relating to insurrections, strikes, duels and similar occurrences.
Skills and Services Offered
Historical articles
Talks
General history research
Assist museums with exhibitions
Audit small not-for-profit societies
Qualifications
Master of History – University of New England
Master of Professional Accounting – University of Southern Queensland
Fellow status with CPA Australia
Professional Interests
American history, Crusades, Byzantine, Space Race, Cold War, Ancient Roman Government, Ancient Greek Democracy, Australia in the 20th Century, Celtic and Norse mythology. I also have an interest in Astronomy, Physics, Geometry and Chemistry. Part of my M. Hist included the Space Race. I have read extensively from many books about astronomy over the ages from the ancients through to the James Webb telescope to launched into Earth's orbit by or in 2018.
Publications and Experience