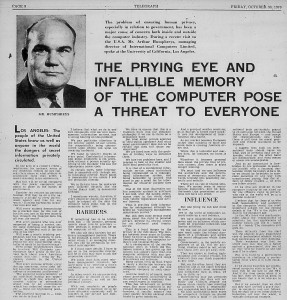 I was looking for a couple of newspaper stories published in the Brisbane Telegraph during late 1970 and I happened to glanced at this intriguing report on the computer industry and privacy.

The Telegraph had reproduced a speech delivered by the Managing Director of International Computers Limited, Arthur Humphreys, at the University of California Los Angeles. Although the speech opened with some odd hyperbole, I was struck by the article’s prescience. The deeply-held concern about the development of computation and its control on human affairs has a long history from the mid-twentieth century and rides on the back of fears about dehumanization and the machine, which, of course, goes back to science’s mechanical revolution in 17th century. But Humphreys presented a few insightful thoughts on the need to protect the privacy of the individual against the access to vast information stored on business and government IT systems. He thought what was needed was an international body to codify computer ethics and ensure its adherence, particularly from government.

What is striking is that the proposal is at a time when the original internet has only just emerged with very limited application; the personal computer is in its infancy used only by hobbyists, and the first consumer computer is still about four years away. Humphreys notes that “one of the most impressive online computer systems in existence… [is] the largest direct-access store in the world [which] deals with vehicle registration and drivers’ licenses.” This was 1970, and a million miles away from the recent News of the World scandal and the many familiar stories about hacking into computerized telecommunication and data storage systems. Watergate was just a hotel-office complex in Washington D.C.

I have no idea if Arthur Humphreys and his proposal had any role in the establishment of the national & global regulatory systems that came in the wake of the emergence of the World Wide Web in the 1990s. It is just a passing historical document for me and it is for computer historians to provide an answer. However, the last few paragraphs of the Telegraph’s report of Humphrey’s 1970 speech provide a note of providence for us today:

“If we do not establish our professional computer ethic in the ’70 ‘s it may be too late in the ’80 ‘s. And if the time comes that it is too late, then we all shall know in our hearts that it is we who are to blame.

But if we succeed, then we shall not only have averted a grave danger to ourselves and our fellows, but we shall have set other modern industries, all over the world, a valuable and proud example.”

The historical question for us in 2011 is the nature of the success.

Reference: Arthur Humphreys. The Prying Eyes and Infallible Memory of the Computer Pose a Threat to Everyone. Telegraph (Brisbane). Friday, October 30, 1970. Page 8.

The John Douglas Kerr Medal of Distinction for 2016