On 11 June 2014, a memorial commemorating wartime service of the people of Napranum community (formerly Weipa Presbyterian Mission) was opened by the Honourable Warren Entsch MP and the Elders of Napranum, in the presence of Keith Payne VC, OAM, Councillors and community members.  A catafalque party was provided by local members of Bravo Company, 51st Battalion, the Far North Queensland Regiment and Air Force personnel from RAAF Base Scherger.

PHAQ member, Geoff Wharton, who has conducted extensive research in the Western Cape York Peninsula region for over 30 years, was engaged by the Napranum Aboriginal Shire Council to manage the War Memorial project. The project was funded by a grant to Council from the Western Cape Trust.  For Geoff this was much more than a standard consultancy project – he had first heard about the community’s wartime service from Elders during the 1980s.

Guided by photographs acquired from former missionary, the late Margaret Little, and oral accounts by Margaret and community elders, Geoff compiled a preliminary list of sixteen Aboriginal men who served during the Second World War. Later he discovered that one non-indigenous man who had married a local Indigenous woman had served during the First World War with the 9th Battalion and died at sea en route to Egypt. 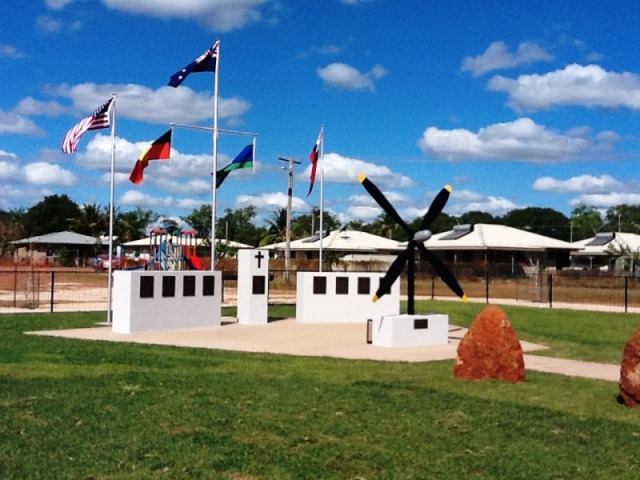 During consultation with the community, it became clear that the stories of frontier conflict and the bravery of tribal warriors should be included in the memorial story plaques and associated published history. Some years ago Geoff was alerted by Jonathan Richards to significant records held at Queensland State Archives which provided crucial evidence of massacres inland and north of Weipa during the late 1880s.  As we know, historians such as Henry Reynolds have long argued that Australian frontier conflict should be formally recognised in local war memorials. Geoff has done this at Napranum and at another war memorial which he designed for the Mapoon community (85 kilometres north of Weipa) in 2010.

Walking into the main entrance of the war memorial, visitors see a routed Ironwood timber sign made by the Napranum Rangers. Geoff encouraged as many community groups as possible to contribute to the design and construction of the various elements of the memorial. This created strong community support for and Indigenous ownership of the project. Napranum Rangers carry out a wide range of cultural heritage and environmental management on the Napranum lands.

Guarding the entrance pathway are six ironstone boulders representing the twelve main tribes / language groups who came to live at the first Weipa Mission. In the centre foreground is a relic from a wartime rescue event. It is a propeller from a USAAF P-47D Thunderbolt fighter aircraft, one of two which force-landed near Duyfken Point in 1944. The pilots were assisted by Aboriginal men and the missionary who had travelled to their rescue in a dugout canoe.

In addition to the memorial structure, Geoff prepared a detailed military history which was included with the opening programme and distributed to every community household.

The opening ceremony was a wonderful community event with strong support from all age-groups.  Relatives of Private Alfred Gostelow (9th Battalion WW1) travelled hundreds of kilometres from the southern Peninsula to attend and a large contingent of the Bardell family from Victoria also drove up. Captain George Bardell was officer commanding 14th Australian Small Ship Company, in which 16 Weipa men served during 1943-1944. Most of these men later were posted to the Torres Strait Light Infantry Battalion.